Ford’s new unibody pickup will debut on Tuesday, June 8, and is expected to share a platform with the Bronco Sport crossover.

The Maverick is expected to share a platform with the Bronco Sport crossover and arrive by the end of the year.

UPDATE 6/3/21 9:30 a.m.: Ford posted an advertisement for the upcoming Maverick pickup on YouTube, and we spotted a hybrid badge on the tailgate.

Ford will reveal a new pickup truck next week on Tuesday, June 8, at 6 a.m. ET, and this is the first official photo of what will be called the Maverick. It’s a compact pickup that’ll be smaller and cheaper than the body-on-frame Ranger mid-size truck, and it should arrive by the end of the year starting just over $20,000. 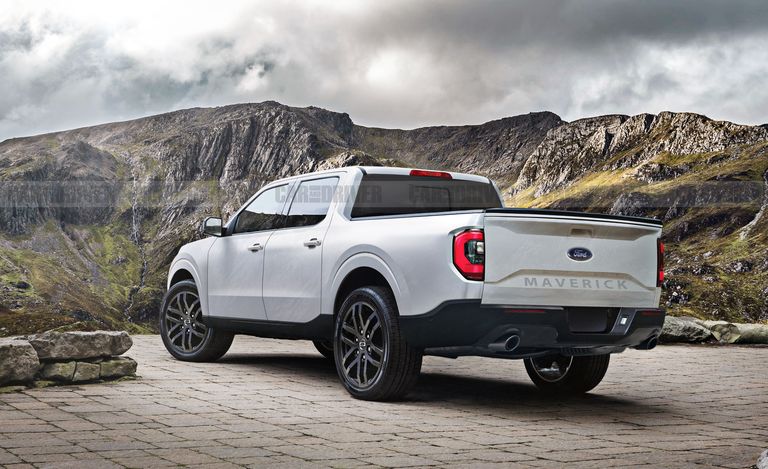 The Maverick is expected to share its platform with the Escape and Bronco Sport crossovers, and from spy photos we spotted that it will have an independent rear suspension. It will be built alongside the Bronco Sport at Ford’s plant in Hermosillo, Mexico. And, like the Honda Ridgeline and the upcoming Hyundai Santa Cruz, it will have unibody construction.

It’s also likely to share powertrains with the Bronco Sport, and that SUV’s optional 250-hp turbocharged 2.0-liter inline-four could be an option. There should be a less powerful choice for the cheaper base model as well. Both front- and all-wheel drive should be available.

Ford previously said that the new pickup would have a sub-$20,000 starting price, but we think it will cost slightly above that. The truck in this teaser shows an XLT badge, though other trims will be available, too. We’ll know more about the Maverick next week, and it should go on sale in the U.S. by the end of this year.