Traditionalists are quick to give BMW flak for applying its full-bore M treatment to models that don’t adhere to the go-fast formula set by the brand’s most legendary driver’s machines. Vehicles like the twin-turbocharged, all-wheel-drive, automatic-transmission X5 M SUV spring to mind—undeniably good to drive but everything that an E30 M3 is not. We’re just glad that the latest M3 is awesome and can still be had with a stick shift. But BMW has stuck to historical precedent and refrained from creating full M versions of its largest, most luxurious models (namely, the 7-series) instead referring the high-performance work to its long-standing German tuning partner, Alpina. It was a given that BMW’s X7 full-size SUV would get the Alpina treatment, which is now available in the form of the 2021 Alpina XB7.

We’ve previously driven the three-row XB7 in Germany—exclusively on a tight, challenging racetrack no less—and we’ve already tested the mechanically similar Alpina B7 sedan, so driving the XB7 around our home base was not entirely unfamiliar. Unlike the B7, which sits below the pricier, V-12-powered M760i in the 7-series lineup (despite being the better of the two cars to drive), the $142,295 XB7 is the top-dog X7. Lording over the $100K M50i model with which it shares its foundation and twin-turbo 4.4-liter V-8, the Alpina gains larger twin-scroll turbos, a less-restrictive active exhaust, and additional cooling capacity. The result is a bump in horsepower from 523 to 612, with torque increasing from 553 to 590 pound-feet. Also included is a retuning of the ZF eight-speed automatic transmission, which connects to the X7’s standard all-wheel-drive system. 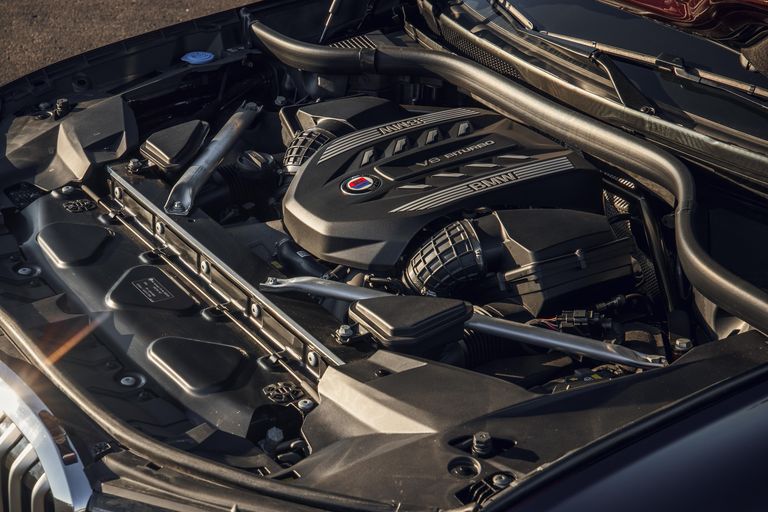 As with previous Alpinas, the XB7’s performance is accented by a somewhat soft, luxurious character, one that suits a big SUV’s mission better than the snarling, hard-edged tune of an M car. Its opulent BMW interior is virtually unchanged versus lesser X7s, save for a few Alpina emblems, a revised instrument-cluster display, and a switch from paddle shifters on the back of the steering wheel to the tuner’s trademark shift buttons. Exterior changes amount to new bumpers, the rear incorporating four big exhaust pipes and the front featuring prominent ALPINA lettering on its lowermost section, which has the added benefit of lessening the visual heft of the X7’s oversized kidney grilles. The 36-decibel rumble of the XB7’s exhaust at rest is an indicator of its straight-line potential, but even at max thrust its deep V-8 growl measures a distant and refined 77 decibels, and with few of the shouty pops and crackles that can draw eyerolls from onlookers.

The booming popularity of crossovers is the obvious driving force behind the XB7’s creation. So is the presence of the Alpina’s closest competitor, the $133,095, 603-hp Mercedes-AMG GLS63, which we’ve already recognized as an overachieving heavyweight at the test track. The XB7 earns the same distinction. Weighing 63 pounds less than its rival, our 5864-pound test car was only a fender behind the AMG as it surged to 60 mph in 3.7 seconds and covered the quarter-mile in 12.1 seconds at 117 mph. Aided by a deep well of torque and smooth yet rapid shifts from the ZF gearbox, the Alpina is actually the quicker of the two on the move, pulling slightly ahead of the Mercedes above 100 mph as well as through our 30-to-50-mph and 50-to-70-mph passing tests. 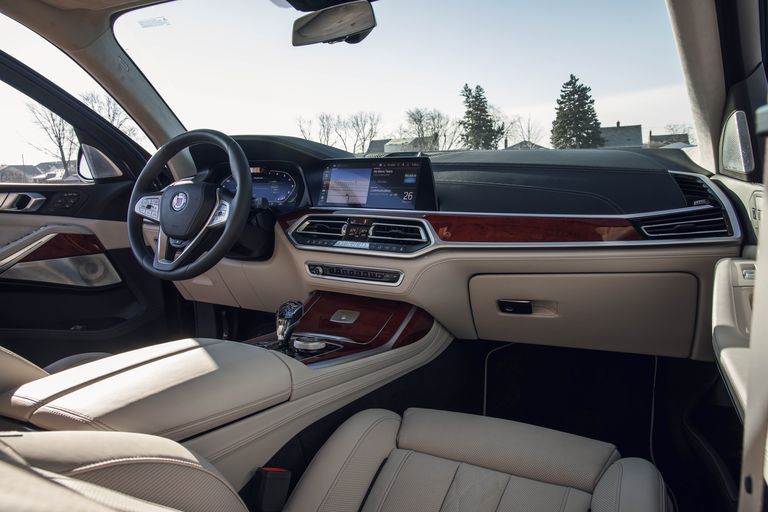 For reference, our long-term X7 M50i needed 4.1 seconds to hit 60 mph when it was new and 12.6 seconds to trip the quarter-mile lights at 110 mph. Whereas the M50i runs into an electronically limited wall at 124 mph, the XB7’s computers let it carry on to a claimed 180 mph, if you’re in that big of a hurry to get to Starbucks. Given their power and girth, both the XB7 and the GLS63 gulp a lot of fuel. The Alpina averaged 16 mpg while in our care and only managed 20 mpg on our 75-mph highway test, 1 mpg shy of its EPA estimate and only 2 mpg less than the AMG GLS63.

Alpina fits the XB7 with standard 21-inch wheels and all-season tires, but our example wore gigantic, narrow-spoke 23-inchers wrapped with Pirelli P Zero PZ4 summer rubber, sized 285/35R-23 in front and 325/30R-23 in back. While these big, grippy steamrollers are a sizeable investment—a $2600 option, and the tires alone cost more than $3K to replace via Tirerack.com—they do allow the XB7 to orbit the skidpad at the same sports-sedan-like 0.92 g as the GLS63 and stop from 70 mph in a 149 feet. They also handsomely fill out this BMW’s expansive wheel arches. More important, and unlike that AMG we tested on similarly sized rolling stock, ride comfort remains respectable. Despite the tires’ thin sidewalls and the underlying tautness of the Alpina’s adjustable air springs and adaptive dampers, our XB7 traversed Michigan’s cratered two-lanes with commendable grace, its suspension absorbing big hits with the nearly same poise that deftly manages this tall, heavy SUV’s body around turns. Thank the standard active anti-roll bars and rear-wheel steering for much of the XB7’s ride flexibility and cool composure. 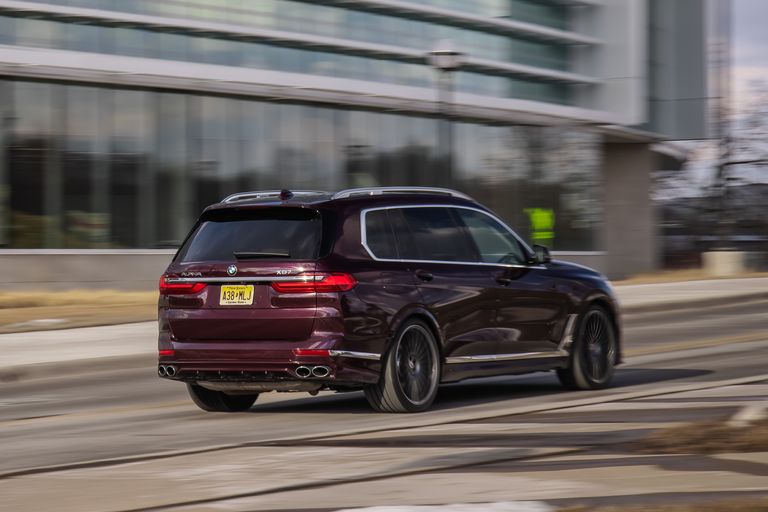 However, those big wheels and tires were a factor in an unusual issue that occurred during our performance testing. You see, we run our 300-foot skidpad test at a constant, maximum-lateral-g pace, which provides a more accurate reading of a vehicle’s steady-state cornering grip than the quick g-load spikes it would generate on a racetrack. It was this extended hard cornering, combined with Alpina’s tuning of the XB7’s suspension and stability control, that prompted our test car’s computer brain to wrongly think that a rollover was imminent and to wildly overcorrect with adjustments to the dampers, active anti-roll bars, and brakes. Our test driver likened the resulting oscillations to riding a mechanical bull, which is as unsettling as it sounds at the handling limit of a near-three-ton machine. Alpina has since added a similar skidpad test to its development process but has decided against revising its software as it deemed the conditions so uncommon that drivers will likely never encounter the issue in the real world.

Although we were able to induce similar suspension motions when rapidly circling a highway entrance ramp, Alpina is probably correct. It’s doubtful that few (if any) XB7 owners will attack runs to the country club with the vigor needed to experience this SUV’s unique handling quirk. As a luxury performance vehicle, Alpina’s people mover can facilitate four-wheeled shenanigans but doesn’t necessarily inspire them. Its strength lies in its comfort, sophistication, and abundance of usable power that makes it feel special enough to flaunt a $156,345 as-tested price—without compromising its six- or seven-seat practicality. We’re not sure how a theoretical X7 M would differ if BMW were to make one, but we imagine we’d like Alpina’s go-fast treatment better.