Cable news channels are at a tipping point. Fox News, CNN and MSNBCare coming off a record-smashing news year, propelled by a wild 2020 election (and its aftermath), not to mention an ongoing pandemic. And yet, with the cable TV business in a state of decline driven by cord-cutting, all three channels are planning for a post-cable world, one in which Americans primarily stream their news.

“It’s an enormous opportunity for the news brand that gets it right,” says former CNN U.S. president Jon Klein, who subsequently founded two direct-to-consumer streaming businesses. “The beauty of streaming is that you can have near-perfect knowledge of your audience, in a way that cable distribution has never allowed. That is the pot of gold waiting at the end of the streaming rainbow for news networks.”

And their strategies could not be more different, with CNN developing entirely new programming and products, Fox News leaning into its primetime programming, and MSNBC bolstering the priorities of its parent company.

The effort drawing the most intrigue at the moment is CNN’s, with its so-called “CNNPlus” service in development. Details on the product remain sparse, but someone familiar with the plans tells The Hollywood Reporterthe idea is for it to have a mix of live programming and on-demand content, including shows hosted by talent like Anderson Cooper and Don Lemon as well as new hires. Talent could explore other genres for streaming, like having an anchor who typically hosts a live TV newscast host a deep-dive interview show. (The Wall Street Journal first reportedCNNPlus development plans.)

CNNPlus will include “interactive” content, according to a job posting for the service. Exactly what form that would take remains unclear, but for an example one could look to a project called “2020 in Our Words,” which CNN launched June 1. The series — which notably is the first CNN digital product to require a user to register an account with the news outlet — combines text, photos and video in an overarching format looking at last year.

“We don’t think it’s just repurposing [CNN’s linear channel] and putting that online, in some IP-directed format,” said WarnerMedia executive vp direct-to-consumer Andy Forssell, speaking at a Barclays conference June 3. “Some of that content is going to change. … What is that going to look like, and what does an internet-native CNN look like online?”

Contrast that to Fox News, which does stream its linear channel, but only overseas, through a service called Fox News International, which is available in some 37 countries. In fact, Fox was early to the streaming game, launching its $6-per-month Fox Nation streaming service — a hodgepodge of shows featuring Fox News talent, as well as entertainment programming like cooking shows and acquired films — in late 2018.

Fox has taken a similar strategic path as its competitors, taking talent from TV and giving them streaming platforms. Most notably it created Tucker Carlson-branded original shows, including Tucker Carlson Originals, earlier this year.

“What we found out is that when we put on live event content like CPAC or exclusive content like the Tucker Carlson Originals … the subscription rates go up dramatically,” Fox COO John Nallen said at the JPMorgan conference May 26. “And in fact, on the heels of those two pieces of content, we saw subscriptions go up 40 percent in the last two months.”

But it has also gone further than any of its linear competitors: This month, Fox News began streaming its primetime shows on Fox Nation the day after they air, making its most popular programing available to stream, albeit on a delay. It also embarked on a promotional campaign offering a free one-year subscription to any active-duty military member, or any veteran. That campaign potentially makes tens of millions of Americans eligible for free subscriptions.

“These are all subscription drivers to attract the average fans for Fox News,” Nallen added. “The channel … is at the heart of everything. But the ability with that loyal audience to extend the brand into these other areas is what we’re really focused on.”

And then there’s MSNBC, which is leaning into parent company NBCUniversal’s streaming strategy, rather than branching out on its own. The channel is having its talent host MSNBC-branded programs for Peacock, NBCUniversal’s streaming service, rather than try to compete with a stand-alone offering. The Choice, which is the channel that MSNBC programs on Peacock, includes news analysis shows hosted by talent like Mehdi Hasan and Zerlina Maxwell.

MSNBC is owned by a cable company, Comcast, and its bet on streaming still revolves around the bundle, even as it accepts the decline of traditional pay TV.

“A few years ago, we had expected Comcast to be the industry’s bulwark against cord-cutting, if only because we assumed that their broader corporate interests would lead them to preserve video subscriptions,” wrote MoffettNathanson’s Craig Moffett and Michael Nathanson May 27. “To their credit, they are clearly not allowing their ownership of NBCU to influence what they think is best for their cable unit.”

If news and sports are the glue that holds the bundle together, that glue is already beginning to weaken. ESPN, the biggest player in the sports world, is already hedging its bets with ESPN+, and Disney CEO Bob Chapek said at a JPMorgan conference May 24 that while the company is committed to linear TV (and the reliable strong cashflows it delivers, “when the time is right to really stomp on the gas and go even stronger into our direct-to-consumer platforms for sports, we’ll do that.”

“We saw how quickly the switch could be flipped with Disney, that is what the news networks be prepared to do as well,” Klein says.

He adds that the companies are “walking a tightrope,” as they balance the decline of linear TV and investing in direct-to-consumer, but that in the long run the benefits of owning the relationship with viewers (instead of leaving it in the hands of a pay TV provider) are worth the risk. “Their challenge now is to understand that those experiments are going to become their main business sometime in the next five years.” 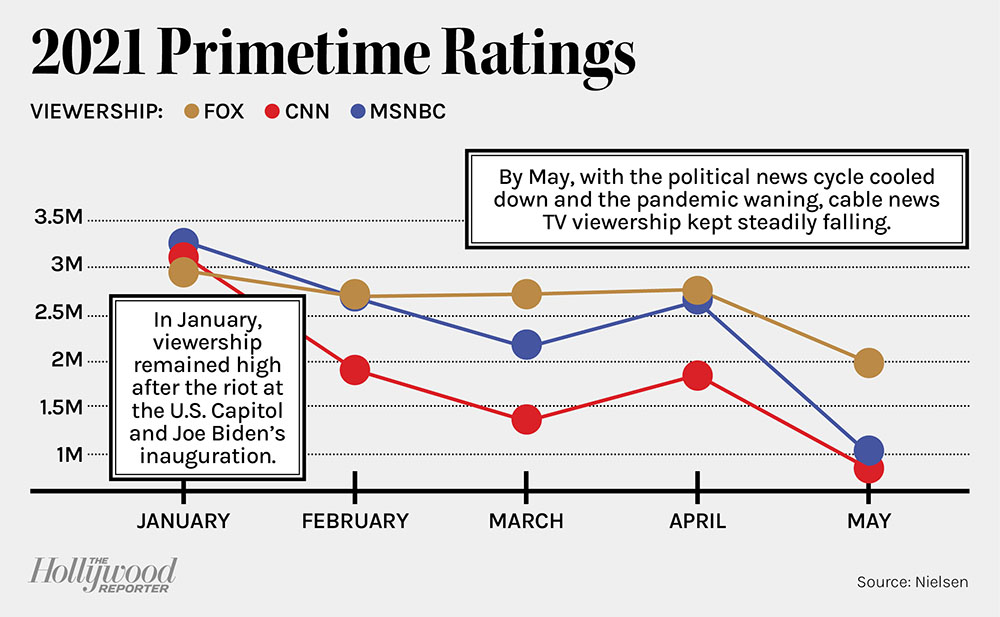